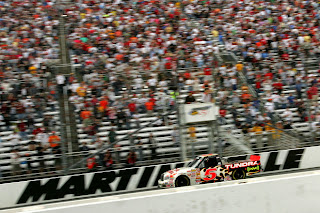 In the early days of the NASCAR Craftsman Truck Series, Mike Skinner won a lot of races and a championship. 2007 has been a big year already and Skinner was looking to win his third race in a row at Saturday's Kroger 250 at Martinsville. He won the pole and Martinsville is a difficult place to pass.


So Mike Skinner's #5 Toyota took the lead at the start and no one could touch him. The race was on FOX. It was the first Craftsman Truck race to be shown on network TV since 2000. The trucks usually put on a very good show but not this time. Just way too many inexperienced drivers getting into unnecessary crashes. It wasn't fun to watch.


The only two trucks that had a chance at Skinner were Todd Bodine's #30 Lumber Liquidators Toyota & Kevin Harvick's #2 Camping World Chevy. Harvick sseemed to be faster than Bodine and was very patient. Bodine admitted after the race that he didn't have anything for Skinner. The turning point of the race was after Dennis Setzer's #75 Spears Manufaturing Chevy spun on lap 207 to bring out the caution. On the restart, Harvick got hung up with a lapped car and dropped back to seventh place. That was it for Harvick and he finished fourth. There was a green/white/checker finish after AJ Allmendinger's #00 Red Bull Toyota hit the wall on lap 249. It didn't matter and Skinner held off Bodine for the win. Skinner still leads the points and hopefully the racing will be better on April 28 in Kansas. Here's video of the race finish.