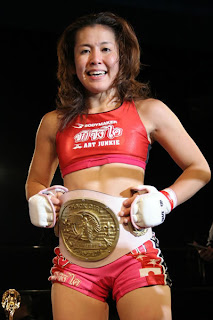 Smackgirl did a double shot on Mar. 11 at Shinjuku FACE. The afternoon show featured opening round matches for the Next Cinderella tournaments and the Gi Grappling Princess League. The main event of the evening show had Satoko Shinashi defending her Flyweight Title against Misaki Takimoto along with matches from the Supergals Open Weight Cup tournament, the Killer Queen Flyweight tournament and a Middlweight Title contender match. Is that enough for you?

The afternoon show began with semi final matches from the Gi Grappling Princess League. The final would come later in the show. Both matches were scheduled for two four minute rounds. Asami Kodera won over Mika Nagano at 1:35 of round one with an arm bar. Aiko Ushiduka won over Ayumi Funakoshi at 1:05 of round two with a rear naked choke. Next was a 50kg bout. Sachi over Yuka Okumura at 3:05 of round two with an arm bar. This was followed by several Next Cinderella Tournament matches. Flyweight-Madoka Ebihara over Mamiko Mizoguchi by unanimous decision. Middleweight-Benkei over Hitomi Sakimoto at 1:41 of round one with an arm bar. Lightweight-Emi Tomimatsu over Megumi Ito by unanimous decision. Lightweight-V1 over Anna Saito at 4:53 of round one with a rear naked choke. Flyweight-Maho Muranami over Sakaya Takase at 2:59 of round one by TKO. The ref stopped the match when Takase suffered a knee injury.

Aiko Ushiduka won the Smackgirl Gi Grappling Princess League 02 tournament final over Asami Kodera at 3:08 of round one with an arm bar. In a Middleweight bout, Miki Morifuji defeated HARUMI at 35 sec. of round one with a rear naked choke. In a Lightweight bout, Kyoko Takabayashi won over Saori Ishioka by unanimous decision. The main event of the afternoon show was a Lightweight bout between Akiko Naito ans Yasuko Mogi. The first round was fairly even but Naito hooked a choke hold in the second round and though Mogi came back, Naito won a split decision.

The first match of the evening show was a 55kg bout between Emi Fujino and Madoka Okada. Fujino nailed her with a right and finished her with an arm bar at 2:34 of round one. In a Smackgirl Killer Queen Flyweight tournament bout, Eri Kaneya won over Yukiko Seki by unanimous decision. In a Super Gals Mix Cup Open Weight Tournament semi final bout. HIROKO won over Yuiga by unanimous decision. Yuiga is a pro wrestler who normally works for DDT.

Next was a special Full Contact Karate exhibition with a girl described as a "Karate Idol" named Yuka Kobayashi. She won a unanimous decision over Chie Sato. In a Super Gals Mix Cup Open Weight Tournament semi final bout, Michiko Takeda won over Tama Chan by unanimous decision. In a Smackgirl Killer Queen Flyweight Tournament bout, Mai won over Masako Yoshida by split decision. The winner of the match between Takayo Hashi & Sybil Starr will challenge Hitomi Akano for the Smackgirl Middleweight Title. Sybil is a pro wrestler who works for Dan Severn in Michigan. Hashi took Starr down but they ended up in the corner so they had to get back up. Hashi took her down again, hit her with a straight right and finished her off with an arm bar at 2:47 of round one. Oh well. But Sybil said she had fun being a Smackgirl and she wants to return someday.

The main event had the very popular Satoko Shinashi defending her Smackgirl Flyweight Title against Misaki Takimoto. Shinashi has been training in Brazil recently. It was a very close match. Both had several takedowns but were able to counter that and they had to get back up. It appears that Shinashi got the edge in round two with a dragon screw throw. Takimoto was able to counter and came back in round three. Shinashi won by split decision. Shinashi said she is ready for the next challenger and is returning to Brazil shortly. Almost forgot to mention that Smackgirl Lightweight Champ Yuka Tsuji announced that she will return to Smackgirl on the Apr. 28 Osaka show to face a gaijin to be announced.