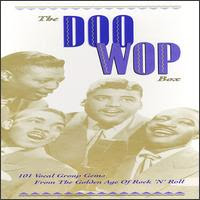 
One of the great things about The Doo Wop Box is it includes great songs by lesser known doo wop groups. Walking Along was the best known song by the minor group The Solitaires. They were formed in Harlem in 1953 by ex-Vocaleer Herman Curtis along with Buzzy Willis & Pat Gaston from The Crows. Monte Owens, Bobby Baylor & Bobby Williams of The Mello-Moods rounded out the group. They signed with Old Town Records and issued some lushly atmospheric records. Curtis left in 1955 and was replaced by Milton Love of The Concords. He sang lead on their biggest hit Walking Along in 1957. Like a lot of doo wop, it's a fun song and The Doo Wop Box is the best place to get it. Personnel changes killed The Solitaires and they disbanded in 1961. Buzzy Willis went on to produce the 70s group Kool & The Gang and has reformed The Solitaires occasionally on the oldies circuit. This is a video someone did of Walking Along set to footage from the film Stalag 17.
Posted by frankp316 at 7:47 AM