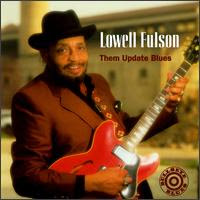 
Veteran bluesman Lowell Fulson built a following in the 50s & 60s and continued to record great music in the 90s. He was born Mar. 31, 1921 in Tulsa. He was already charting with Swing Time Records in the early 50s when he signed with Chess Records in 1954 and recorded his most popular song Reconsider Baby. He stayed with Chess until moving to Kent Records in 1962. He had an even bigger hit in 1965 with Tramp, a song that was even more popular when covered by Otis Redding & Carla Thomas. Like a lot of similar blues artists, his career faded in the 70s. But Fulson came back stronger than ever as a senior citizen. This 1995 CD Them Update Blues from Bullseye Blues is a good example. He sounds as good on this as he sounded in the 60s. Lowell Fulson's health started failing in 1997 and he died Mar. 6, 1999 at age 77. There's not much video footage of Lowell Fulson but I did find this clip of him tearing it up in San Francisco in 1963.
Posted by frankp316 at 7:58 AM