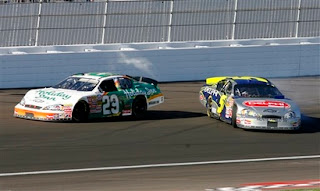 NASCAR is back at Las Vegas Motor Speedway this weekend. This racetrack was reconfigured and repaved since last year. When the Nextel Cup boys tested at Las Vegas, NASCAR told Goodyear that the cars were too fast and they wanted them to slow down a bit. Goodyear was concerned about tire wear anyway so they have produced a harder tire. The problem is it doesn't look like there is any grip so the cars are sliding all over the place. They are also using a smaller fuel cell. If Saturday's Sam's Town 300 is any indication, Sunday's race will be entertaining for fans but the drivers will hate it. Kevin Harvick won the pole.


Kevin Harvick's #21 Auto Zone Chevy led at the start. The first big crash was on lap 13. Matt Kenseth's #17 Arby's Ford got loose while beside David Stremme and hit the wall. He collected Casey Mears & Clint Bowyer. Kenseth blamed himself and this kind of spin would repeat itself for the rest of the race. Jeff Burton's #29 Holiday Inn Chevy took the lead on lap 29. Kyle Busch's #5 Delphi Chevy takes the lead on lap 45.


David Reutimann's #99 Aaron's Toyota has mechanical problems and the caution is out on lap 50. Everyone pits and Kurt Busch's #12 Penske Truck Rentals Dodge takes two tires to get the lead. The Busch brothers were up front but Tony Stewart's #33 Old Spice Chevy takes the lead on lap 75. But Stewart starts to overheat. I don't think his crew did anything to fix this but it didn't bother Stewart and he continued on.


After green flag pit stops, Greg Biffle's #16 3M Ford cuts a tire and hits the wall on lap 117. Kyle Busch leads after pit stops. We just keep getting more cautions. Dave Blaney's #10 Camping World Toyota spins and collects teammate Jason Leffler on lap 127. On the lap 135 restart, Paul Menard's #15 Menards Chevy spins and collects Regan Smith. The Busch brothers still lead. Then Smith & Mike Wallace wreck on lap 156. Everyone pits and will be close on fuel for the end. There won't be a problem as there will be more cautions.


There's a debris caution on lap 183. The leaders stay out. Kyle Busch leads followed by Jeff Burton, Kurt Busch & Tony Stewart. Kasey Kahne's #9 Wisk Dodge spins out and collects Reed Sorenson. NASCAR throws the red flag. The green is back out on lap 194. Kyle Busch leads but Jeff Burton has fresher tires and is faster. On the final lap, Burton tries to pass on the high side. Busch attempts to block him but can't. Then Busch gets loose and spins across the finish line in second place. As this video clip shows, Kyle was upset but he wasn't upset with Burton and they shook hands. If this race is any indication, Sunday's Nextel Cup race will be caution filled but entertaining. The drivers won't like it though.