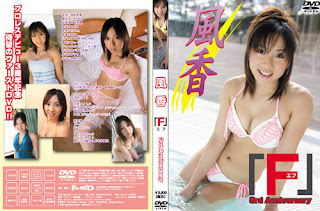 I wonder if Hiroshi Ogawa and the other idiots who run JD Star appreciate the irony of having Fuuka's 3rd Anniversary show the same weekend as Jaguar Yokota's 30th Anniversary show. Probably not. They're so intent on advancing the Athtress concept they can't see the forest for the trees. The show will be Mar. 10 at Shin-kiba 1st Ring. They're issuing a commemorative DVD (pictured) and they're going to have some sort of ceremony at the end of the show. Shhh. "The content is still secret." But the big news is that Nanae Takahashi is coming over from Pro Wrestling SUN to wrestle Fuuka on this show. I like Takahashi but it's been proven that putting Fuuka in the ring with someone of Takahashi's caliber doesn't make Fuuka better. It seems to make her worse. She just doesn't seem to perform well under pressure.

The other big match on the show involves the Athtress team called Team Shin-kiba 1st Ring vs the Caribbean Army Corps. It will be Shuu Shibutani, Cherry & Lily Urai vs Caribbean KIM, Caribbean RUM & Caribbean MOON. It will be a series of singles matches to be announced the day of the show. When the Athtresses win a match, the Caribbean Army member is banished from the building. When an Athtress loses, she's supposed to join the Caribbean Army. Well, that's one way to turn them heel. The other announced match is Ayumi Kurihara & Bisa Ohata vs Bullfight Sora & Hiroyo Matsumoto. I would expect them to add at least one more match.

Here's Fuuka vs Natsuki*Taiyo for the POP Title from the Jr. All Star War Dec. 31, 2006. It's a typical Fuuka match and illustrates several of her weaknesses.