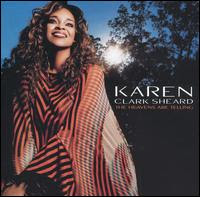 
Karen Clark Sheard is one of the premier "sangers" in the world today. Of course she is one of the legendary gospel group The Clark Sisters. Elektra Records president Sylvia Rhone signed Karen thinking she could sell her to a secular audience the same way she sold Yolanda Adams. That didn't really work but the 2003 CD The Heavens Are Telling is great music. The title song was written and produced by Donald Lawrence. Check out Karen's performance of the song on Bobby Jones Gospel. Rhone left Elektra for Motown. Elektra dropped Karen but she signed with Word Records and released It's Not Over in 2006. Also, The Clark Sisters have reunited and their new CD is out in April. Karen Clark Sheard is the kind of singer that musicians listen to but I doubt she is marketable to a secular audience. She's someone you need to seek out.
Posted by frankp316 at 11:54 AM