AccuRadio Song Of The Day-Len 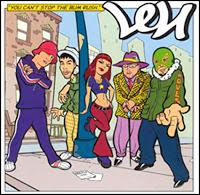 So I'm sure you all remember this song. It was a top ten hit in 1999. But I bet you don't know anything about Len. And yes it is a true one hit wonder. Len was formed in Toronto in 1991 by Marc Costanzo and his sister Sharon. It came out of Sharon singing on Marc's basement demos. The music is indie rock with hip hop elements. After releasing a couple of albums independently, Len signed with Work Group with Sony distribution. Jennifer Lopez was also on that label. Their big break came when Steal My Sunshine appeared in Doug Liman's 1999 film Go which was very popular with teens. Then MTV and MuchMusic played the Steal My Sunshine video to death. It reached #9 on the Billboard Hot 100 and #3 in Canada. Costanzo based Steal My Sunshine on the 1976 disco hit More, More, More by Andrea True Connection. The vocals by Marc and Sharon are supposed to be similar to Human League's Don't You Want Me and that group used models as singers. So the vocals are supposed to be amateurish. Among those who worked on this album were Brian "DJ Moves" Higgins, Richard "Buck 65" Terfry and Brendan Canning who would go on to form Broken Social Scene. They were called Cryptik Souls Crew. The album You Can't Stop The Bum Rush was certified Gold. It is available as a budget CD. For the 2002 album We Be Who We Be, Len signed with DreamWorks Records. But DreamWorks closed and the album wasn't released. Len released it themselves as The Diary of the Madmen in 2005. Costanzo now says he only signed with DreamWorks for the advance money. He never wanted to record an album for them. For a while Marc Costanzo was an A&R guy at EMI Canada. Len released an album on EMI in 2012. Costanzo says in interviews that he knew Steal My Sunshine would be a one hit wonder. Besides, he hated being famous. He also ran into tax problems because he never hired an accountant to run his business. The Financial Times chronicled his court case in 2017. It was not pleasant. He does remember the good times though. Here's the video for Steal My Sunshine by Len.