AccuRadio Song Of The Day-The Crusaders 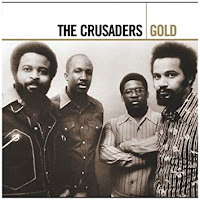 Of course The Crusaders are best known for the 1979 smash hit Street Life featuring singer Randy Crawford. But they were one of the more durable jazz groups because they changed with the times. They started out in the 50s in Houston. Pianist Joe Sample, tenor sax player Wilton Felder and drummer Stix Hooper went to high school together. They called themselves The Swingsters. They were joined by trombonist Wayne Henderson, flutist Hubert Laws and bassist Henry Wilson and became The Modern Jazz Sextet. Sample, Felder, Hooper and Henderson moved to Los Angeles in 1960. They became The Jazz Crusaders and signed with Pacific Jazz Records. They recorded several albums for Pacific Jazz in the 60s. Jimmy Bond and Buster Williams were among the bassists. They left Pacific Jazz in 1970 and signed with Chisa Records owned by Hugh Masekela and producer Stewart Levine with Motown distribution. After a couple of albums, Chisa closed and after one album on Mowest, they signed with ABC's Blue Thumb label. By this time Levine was working at Blue Thumb. With all the changes in jazz like jazz rock and fusion, Levine suggested the name change to The Crusaders. Put It Where You Want It is from the 1972 album Crusaders 1, their Blue Thumb debut. By this time guitarist Larry Carlton joined the band. Though bassist Robert "Pops" Popwell toured with The Crusaders and permanently joined them in 1974, in the studio Felder played bass and session musician Chuck Rainey was brought in. Wayne Henderson left to go solo in 1975. The Crusaders continued to record for MCA after they bought ABC. Hooper left in 1983. The Crusaders eventually split up in 1991 though Sample had been recording and touring solo for a while. This Hip-O 2CD comp covers the Blue Thumb years. The Crusaders reunited a few times. Sample and Henderson died in 2014. Felder died in 2015. Here's The Crusaders performing Put It Where You Want It at The Rumble In The Jungle in Zaire 1974 from the 1996 documentary When We Were Kings.