AccuRadio Song Of The Day-Joey DeFrancesco 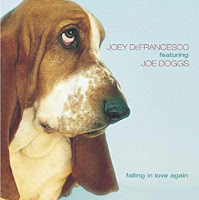 Joey DeFrancesco has done a lot to keep the Hammond organ alive. He is probably the most prolific jazz musician in the world. He records a lot not only as a leader but as a sideman. And he's been going since he signed with Columbia Records in 1987 when he was 16 years. And of course he records with many musicians and singers. On this 2003 album Falling In Love Again, he is recording with a singer credited as Joe Doggs. You might be surprised to know that Joe Doggs is actually Oscar winning actor Joe Pesci. You might also be surprised to know that Pesci started out in music in the 60s. Pesci was friends with Frankie Valli and The Four Seasons. Then while working as a barber like his mom, Pesci played guitar with several bands including Joey Dee and the Starliters who were famous for Peppermint Twist. Then in 1968 he recorded an album for Brunswick Records called Little Joe Sure Can Sing. He was supposed to be called Joe Ritchie but the cover just says Little Joe. It was produced by jazz producer Jack Lewis and and arranged and conducted by Artie Schroeck. He also performed in New York clubs with actor Frank Vincent as Vincent and Pesci. They were supposed to be like Martin and Lewis. They released a single in 1972. Of course then he got into acting. He returned to music in 1998 with the album Vincent LaGuardia Gambini Records Just For You. It's supposed to be his character from My Cousin Vinny. Then Pesci announced his retirement from acting to pursue music. From what I can tell, the only time Pesci recorded was as Joe Doggs on this 2003 album Falling In Love Again with Joey DeFrancesco. Musicians are Pat Martino on guitar, Ralph Moore on tenor sax and Jeff Hamilton on drums. Pesci is not identified. So it makes me think that Concord thought of signing Pesci and they wanted to try him out. Pesci hasn't recorded since then and he has returned to acting. Here's a video of Secret Love by Joey DeFrancesco featuring Joe Doggs. Just another unearthed musical curio.