AccuRadio Song Of The Day-Django Reinhardt 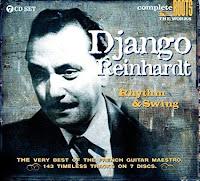 
Here's an interesting recording from the early days of Django Reinhardt's Quintette du Hot Club de France. Though Reinhardt frequently recorded with bands that featured singers, I don't think his own band featured singers very much. Lily Belle May June was one of four songs recorded on Mar. 4, 1935. Based on the discography I looked at, Reinhardt's quintet had recorded previously once. So they may be trying to figure out what they want to be. Of course Reinhardt is on guitar along with Stephane Grappelli on violin. Roger Chaput and Joseph Reinhardt are also on guitar with Louis Vola on bass. The singer is Jerry Mengo. This was the only time Mengo sang with Reinhardt. And he wasn't really a singer. He was born Giuseppe Mengozzi Apr. 17, 1911 in Nice, France but he grew up in England. His singing appearance with Reinhardt was while he was studying in Paris. For the most part he was a drummer and later a bandleader recording swing in the 40s and easy listening music in the 60s. He also composed film music and even appeared as an actor in a couple of Jean-Pierre Melville films. Mengo died in 1979. I guess appearing with Reinhardt is Mengo's claim to fame but Reinhardt wasn't famous when he sang with him. You can get Mengo's appearances on this 7CD Reinhardt box set. Here's a video of Lily Belle May June by Django Reinhardt featuring Jerry Mengo.