AccuRadio Song Of The Day-Kings Of Convenience 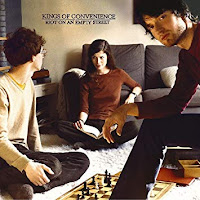 Folk music fans will probably like Kings Of Convenience. They had success in their native Norway and other European countries. They last recorded in 2009 but they still tour and there are plans for a new album. Kings Of Convenience are from Bergen, Norway. Erland Oye and Eirik Glambek Boe went to high school together. They were in the band Skog with two friends. Oye was lead singer and bassist. Boe played guitar. Skog released a 1996 EP and then they split up. Oye and Boe formed Kings Of Convenience in 1999. They played some festivals and then they moved to London to record the album Quiet Is The New Loud for Kindercore. The album topped the Norwegian chart and it did well enough in England to get Kings Of Convenience a deal with the much larger Astralwerks label. Oye moved to Berlin, Germany and he recorded with the electronic duo Royksopp. He released the 2003 solo album Unrest. He also toured as a DJ. Love Is No Big Truth is from the 2004 CD Riot On An Empty Street. Again the album did well in Norway and other European countries. Canadian singer Feist appears on a couple of songs and in return Boe appeared on one of her albums. Meanwhile Oye formed The Whitest Boy Alive and they released a CD in 2006. Boe formed Kommode with former members of Skog. They toured but did not record. Kings Of Convenience got back together to tour and release the 2009 album Declaration Of Independence. They even toured in North and South America. That is their most recent album. Oye moved to Sicily in 2012 and he released a 2014 solo album. He also disbanded The Whitest Boy Alive. Boe continued to play with Kommode. They released an album in 2017. In 2016, Kings Of Convenience announced on Facebook plans for a new album. After a 2017 tour, they are working on finishing the album for a 2019 release. Here's Kings Of Convenience performing Love Is No Big Truth on the German TV show Rockpalast 2007.