AccuRadio Song Of The Day-Janelle Monae 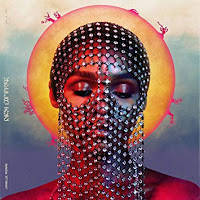 Janelle Monae Robinson is an R&B singer who emphasizes her visual style. She has had some success mostly as an album artist. But she is getting into acting so I get the sense that may be her long term future. She was born Dec. 1, 1985 in Kansas City, KS. She dreamed of performing on Broadway so she moved to New York to attend the American Musical and Dramatic Academy. She moved to Atlanta in 2001 where she met Antwan "Big Boi" Patton of OutKast. She appeared on the OutKast album Idlewild. Patton told Sean "Puffy" Combs about Janelle and she signed with Bad Boy Records in 2006. The EP Metropolis was released in 2007 and the single Many Moons was nominated for a Grammy. This was a concept album loosely based on Fritz Lang's legendary film. Janelle's 2010 album The ArchAndroid was the second part of that concept. It did OK but there were no hit singles. She did appear on the fun. 2011 number one hit We Are Young. While Janelle was recording her 2013 album The Electric Lady, she became a spokeswoman for CoverGirl. The Electric Lady was a continuation of her Metropolis concept. The single Q.U.E.E.N. featuring Erykah Badu was supposed to be a big hit. It charted in R&B but it didn't cross over to pop. In 2015 Janelle signed with Epic Records and released the EP The Eephus. Then she got into movies appearing in the 2016 films Moonlight and Hidden Figures. After that she released the 2018 album Dirty Computer. The single Make Me Feel is obviously influenced by Prince. Janelle wrote and produced it with Swedish producers Mattman & Robin. She revealed later that Prince helped her with the song just before he died. She usually works with the production group Deep Cotton. Now she's getting into movies. The Robert Zemeckis film Welcome to Marwen starring Steve Carell will be released Christmas 2018. Janelle's voice will be in the upcoming remake of Lady and the Tramp. And she is appearing in the Harriet Tubman biopic Harriet set for release next year. She is touring to support her latest album. Her music has done OK. But if she gets more film work, she might not have the time to do music anymore. I wouldn't be surprised if she turns up on Broadway. That's what she wanted as a little girl. Here's the video for Make Me Feel by Janelle Monae.
Posted by frankp316 at 8:01 AM