AccuRadio Song Of The Day-Tom Jones 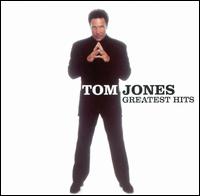 With his big voice and hip swiveling performances, Tom Jones was one of the most popular singers of the late 60s and has proven to be very durable over the years. It's Not Unusual was his breakthrough hit in 1965. He was born Thomas John Woodward June 7, 1940 in Pontypridd, Wales. He was a big R & B fan growing up and loved singers like Solomon Burke and Jackie Wilson. He spent two years in bed when he contracted tuberculosis at age 12. All he did was listen to music. He was married at age 16 and had a son soon after. To support his family, he worked at a glove factory. In 1963, Jones was lead singer of Tommy Scott & The Senators and they recorded with producer Joe Meek. When that didn't work out, he was spotted by Gordon Mills who had a group called The Viscounts. By this time, Mills got into management and production. He renamed Tom Woodward Tom Jones after the 1963 hit film and he signed him to Decca Records. It's Not Unusual was his second single. It topped the British charts and reached #9 on the Billboard Hot 100. Mills wrote the song with arranger Les Reed. They wrote several of Jones' hits. One of the myths about this song is that Jimmy Page played guitar. According to Reed, session musician Joe Moretti played guitar. But it is true that a pre-Elton John Reg Dwight played piano when Jones' regular pianist didn't show up. They found him in a coffee house across the street from the recording studio. Jones also had big hits with What's New Pussycat and the theme for the James Bond film Thunderball. When he started to fade, Mills turned Jones into a crooner and that worked very well. Jones started to play Las Vegas in 1967 and over the years has been a big draw there. He also became good friends with Elvis Presley. Of course His stage act was heavily influenced by Elvis. Girls used to throw underwear and hotel keys to Jones while he was performing. Jones only #1 hit in the US was She's A Lady in 1969. He also had a TV variety show. When Jones faded in the 70s, he turned to country music and had some chart success. In 1988, he had a big hit with the Prince song Kiss. This budget comp has all his hits. Tom Jones still records occasionally and was recently named a judge on the UK version of the talent show The Voice. So he's still going strong today. Here's Tom Jones performing It's Not Unusual on the German TV show Beat Beat Beat 1965.
Posted by frankp316 at 8:19 AM