AccuRadio Song Of The Day-Nino Ferrer 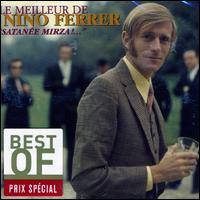 Nino Ferrer started out as a jazz guitarist and in the mid-60s became a pop star in France with his breakthrough hit Mirza. He is frequently compared with Jacques Dutronc but Ferrer didn't have the same success and then quit the music business. He was born Nino Ferrari Aug. 15, 1934 in Genoa, Italy. His father was Italian and his mother was French. His father worked in a nickel mine in New Caledonia in the South Pacific. In 1939, Nino and his mom were on holiday in France. But they were unable to leave France because of WWII. The family reunited in 1947. Ferrer earned a degree in archaeology but found it was a low paying profession. He also taught himself to play several musical instruments and was a big jazz fan. After trying several jobs that he didn't like, he decided to become a jazz musician and worked with Richard Bennett & The Dixiecats and then jazz trumpeter Bill Coleman. For several years he played guitar with jazz singer Nancy Holloway. But he was also writing songs and signed with Barclay Records in 1963. Ferrer wasn't successful at first but he was allowed to record his own songs in 1965. Ferrer had become a big fan of soul singers like Sam Cooke and Otis Redding and he used that influence to write and record Mirza in 1965. It was a big hit in France and Nino Ferrer was now a star. Credit should also go to organist Bernard Estrady for the excellent riff. The two were friends in college and worked together frequently. Ferrer could have been a much bigger star. But he didn't like the grind of the French pop music business or the comparisons to Jacques Dutronc. So he moved to Italy in 1967 and continued to record increasingly political songs. After hosting a TV variety show, Ferrer moved back to France in 1970. He formed a group with former T. Rex guitarist Mickey Finn. He recorded an album per year but he wasn't as successful as in the 60s. He quit music in 1984 and returned to his castle and exhibited his paintings in galleries. He recorded a new album in 1993 but as always, he seemed to tire of public life. After his mother died in 1998, Nino Ferrer shot himself and died on Aug. 13, 1998 at age 63. This comp is a good intro to the enigmatic Nino Ferrer. Here's the video for Mirza by Nino Ferrer.
Posted by frankp316 at 8:03 AM