AccuRadio Song Of The Day-Bad English 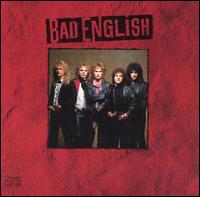 The short lived group Bad English topped the charts with the 1989 power ballad When I See You Smile. They only recorded two albums. British singer songwriter John Waite had success with The Babys and as a solo artist. When his solo career faded, I guess he wanted to reform The Babys and he approached Babys keyboard player Jonathan Cain. Cain was a member of Journey at the time. The timing was perfect. Journey split up in 1987. Cain talked to Journey guitarist Neil Schon about forming a new band with Waite and former Babys bassist Ricky Phillips. The name Bad English came when they were playing pool together and of course "english" is a billiards term. They hired Deen Castronovo to play drums. They signed with Epic Records and their debut album reached #21 on the Billboard Hot 200 and was certified Platinum. When I See You Smile was the second single and topped the Billboard Hot 100. Though Bad English wrote most of their own songs, When I See You Smile was written by Diane Warren who has written many hit songs. Though Bad English recorded a second album, Waite and Schon were butting heads over the direction of the band. It appears that Waite didn't like arena rock very much and Schon thought it was a proven formula for success and didn't like Waite's pop tendencies. By the time their second album was released, Bad English had already split up. The Bad English album is available as a budget CD. John Waite went back to being a solo artist and released a new CD last year. Neil Schon, Jonathan Cain and Deen Castronovo were all part of the 1996 reformation of Journey. Ricky Phillips was a member of Coverdale-Page and is currently a member of Styx. Bad English had potential for a longer run but that's the way things go in the music business sometimes. Here's the video for When I See You Smile by Bad English.
Posted by frankp316 at 8:04 AM