AccuRadio Song Of The Day-Fred Anderson 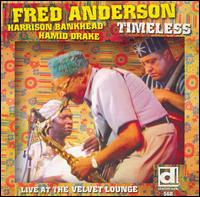 Tenor sax player Fred Anderson had the training and knowledge to play any kind of jazz he wanted. But he preferred free jazz and was one of the leading lights of the Chicago free jazz scene for many years. He didn't record much until his senior years. Ode To Tip is from a 2005 recording at his own club. He was born Mar. 22, 1929 in Monroe, LA. He taught himself to play sax and he idolized Charlie Parker. His family moved to Evanston, IL in the 40s and Anderson studied at the Roy Knapp Conservatory in Chicago. Anderson worked as a carpet installer for years while playing part time. A lot of his contemporaries toured Europe but he stayed home to support his family. Anderson played with sax player Joseph Jarman in the 60s and was one of the founding members of the Association for the Advancement of Creative Musicians (AACM) which was the home for many free jazz musicians. In the 70s, he opened his own club The Birdhouse and then in 1983 took over the famed Chicago club The Velvet Lounge when the previous owner died. Anderson was a regular participant in the club's weekly jam sessions. He recorded more frequently as a leader in the 90s and into the new millennium. He recorded several CDs for the Delmark label including this 2005 CD recorded at his own club with bassist Harrison Bankhead and drummer Hamid Drake. Delmark also released a DVD of the concert. Remember Anderson was 75 when this was recorded. So when most guys his age are retired, he's still exploring the boundaries of jazz. The Velvet Lounge moved in 2006 and Anderson also owned The Beehive. Plenty of musicians went through his clubs and credit Anderson as a mentor. After recording an 80th birthday party in 2009, Fred Anderson died on June 24, 2010 at age 81. Here's Fred Anderson performing Ode To Tip on the 2005 DVD Timeless: Live At The Velvet Lounge.
Posted by frankp316 at 8:12 AM