AccuRadio Song Of The Day-Ronnie Boykins 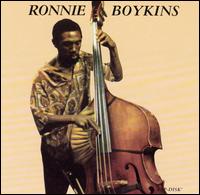 Bassist Ronnie Boykins is best known for his days with Sun Ra in the 60s. After he left in 1966, Ra couldn't find a replacement and ended up playing bass himself. Boykins also recorded all kinds of music as a sideman but his primary interest was in free jazz. This 1975 album The Will Come, Is Now was his only recording as a leader before his premature death in 1980. He was born Dec. 17, 1935 in Chicago. Like Sun Ra bandmates John Gilmore and Pat Patrick, Boykins went to DuBose High School and studied under famed music teacher Captain Walter Dyett. He also studied with Duke Ellington bassist Ernie Shepard. Boykins played with Muddy Waters, Johnny Griffin and Jimmy Witherspoon before joining Sun Ra in 1958. He was an integral part of the band until he left in 1966. Boykins played with Rahsaan Roland Kirk in 1967 and he formed his own group The Free Jazz Society with pianist John Hicks. And he played with The Melodic Art-tet. The Will Come, Is Now was his only album as a leader in 1975. I understand it was the final album released by the 60s avant garde jazz label ESP-Disk. Musicians include Jimmy Vass, Monty Waters and Joe Ferguson on sax and flute, Daoud Haroom on trombone, Art Lewis on drums and George Avaloz on conga. The album is available on CD and will be of interest to fans of free jazz. Ronnie Boykins toured with Steve Lacy in 1979 and played with Sam Rivers, Mary Lou Williams and Marion Brown among others. He died of a heart attack on Apr. 20, 1980 at age 44. His son Ronnie Boykins Jr wrote the music for the 2007 film Urchin. Here's a video for The Will Come, Is Now by Ronnie Boykins.
Posted by frankp316 at 7:58 AM