AccuRadio Song Of The Day-Barry White 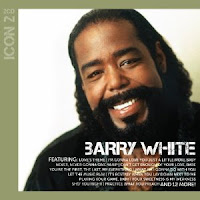 After Barry White had his breakthrough hit with the Love Unlimited Orchestra, he had a long string of hits as a solo artist and was one of the biggest soul stars of the 70s and probably the creator of disco. Can't Get Enough Of Your Love, Babe was his only number one pop hit as a solo artist. He was born Barry Eugene Carter Sept. 12, 1944 in Galveston, TX and grew up singing in church. His family moved to Los Angeles and White got involved in gangs which landed him in jail for stealing tires. According to White, he woke up one day at 13 years old and had that deep voice. That's puberty for you. When he got out of jail, he worked for Del-Fi/Mustang/Bronco Records owner Bob Keane as a producer. Then he formed the girl group Love Unlimited featuring his wife Glodean and they had a top 20 hit in 1972 with Walking In The Rain With The One I Love. That was on UNI Records. When UNI head Russ Regan left for 20th Century Records, White went with him. White's Love Unlimited Orchestra topped the charts with Love's Theme in 1972. Then White looked for singers to produce. He was very reluctant to record as a solo artist. But when his best friend Larry Nunes heard his demo, he talked White into recording himself. At first he was going to call himself White Heat but then settled on Barry White. When I'm Gonna Love You Just A Little More Baby topped the R & B Singles chart and reached #3 on the Billboard Hot 100, White was finally convinced. He had several number one R & B hits but Can't Get Enough Of Your Love, Babe was his only number one pop hit. With his girth and deep voice, White was given the nickname The Walrus Of Love. White continued to have success until he left 20th Century for Columbia in 1979. He didn't have the same success there or at A & M Records in the 80s. He had a bit of a comeback in the 90s after appearing on the Quincy Jones album Back On The Block  and he continued to tour. You can get all his hits on this 2CD budget comp. Barry White retired due to health problems and died on July 4, 2003 at age 58. Here's Barry White performing Can't Get Enough Of Your Love, Babe on Soul Train followed by an interview.
Posted by frankp316 at 8:22 AM