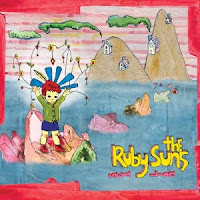 The Ruby Suns are part of a loose collective of bands based in New Zealand. Group leader Ryun McPhun was born in Ventura, CA and regularly visited New Zealand when he was a child. So if you listen to his music, he is obviously a Brian Wilson fan. After traveling in Africa and Asia seeking out different kinds of music, McPhun moved to Auckland in 2003. He became a part time member of The Brunettes. The Brunettes have been around the New Zealand music scene since 1998. After playing with a couple of other bands, McPhun started The Ruby Suns in 2005 and released his first CD in New Zealand. Through his association with The Brunettes, he got a US record deal with Sub Pop and released Sea Lion in 2007. The Ruby Suns mix of California pop and world music influences caught on with indie music fans. They toured Europe and Australia. They got more attention when Oh, Mojave was used in a Windows Vista commercial. The Ruby Suns 2010 CD Fight Softly was more of a Ryan McPhun solo CD as he recorded it in his home studio. It remains to be seen if McPhun will continue The Ruby Suns. But I'm sure he will continue to work with The Brunettes and other bands in Auckland. Here's a video of The Ruby Suns performing Oh, Mojave in the streets of Paris 2007.
Posted by frankp316 at 11:53 AM