AccuRadio Song Of The Day-Kelli O'Hara 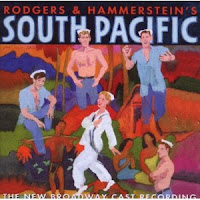 Though the classic Rodgers & Hammerstein musical South Pacific had been revived on stage on a limited basis over the years, this 2008 production was the first full blown Broadway revival. It was very successful. It won seven Tonys and ran for two years. Kelli O'Hara was nominated for a Tony and her performance as Nelly Forbush got great reviews. Like her fellow Oklahoman Kristen Chenoweth, Kelli has done very well in Broadway musicals. She was born Apr. 16, 1976 in Oklahoma and graduated with a Bachelor Degree in Vocal Performance at Oklahoma State University. She moved to New York and started out as an understudy in the 2000 musical Jekyll & Hyde. Her debut as a featured performer was in the 2001 revival of the musical Follies. She got her first Tony nomination for the 2005 show The Light In The Piazza and then another one for the 2006 revival of The Pajama Game along with her co-star Harry Connick Jr. South Pacific opened on Apr. 3, 2008 and got mostly positive reviews. It won a total of seven Tonys. Kelli was nominated but didn't win. She took maternity leave for several months in 2009 but returned to the show until it closed in Aug. 2010. That's a pretty good run. Sony Masterworks released the 2008 Broadway cast recording on CD. Kelli O'Hara has recorded 2CDs including one produced by Harry Connick Jr. She has done some TV and film but seems to really enjoy working on Broadway. She is currently starring in the musical Nice Work If You Can Get It which premiered on Broadway in April. As for South Pacific, a planned film based on the 2008 production is being produced by veteran actor and producer Bob Balaban. Here's Kelli O'Hara performing A Wonderful Guy from South Pacific on the PBS show Live From Lincoln Center Aug. 2010.
Posted by frankp316 at 11:15 AM