AccuRadio Song Of The Day-Ronnie Laws 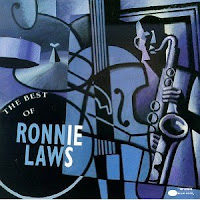 Sax player Ronnie Laws had a lot of success in the 70s with his mix of soul and jazz. He's another one of those guys who was a big influence on hip hop and his music is frequently sampled. He was born Oct. 3, 1950 in Houston the fifth of eight children. His older brother Hubert Laws is a world renowned jazz flutist and his younger sisters Debra Laws and Eloise Laws are singers. Ronnie wanted to be a baseball player. But an eye injury forced him to turn to music. As a teen, he had a band called The Lightmen. After studying music at Stephen F. Austin State University in Texas, Laws moved to Los Angeles in 1970. He got into the studio scene and played with The Crusaders and Hugh Masekela. He joined Earth, Wind & Fire and played on the 1972 album Last Days and Time. He toured with his brother Hubert Laws for a while and appeared on Hubert's 1974 album In The Beginning. Legendary trumpeter Donald Byrd got Ronnie a record deal at Blue Note. His 1975 debut album Pressure Sensitive and the single Always There became a hit with the funk crowd. Of course Laws was criticized for not being jazz enough. So for his third album Friends and Strangers he was moved to United Artists. The album was produced by former Crusaders trombonist Wayne Henderson. Musicians were Bobby Lyle on piano, Larry Dunn of Earth, Wind & Fire on synthesizer, Roland Bautista of EW&F and Melvin Robinson on guitar, Donnie Beck and Nathaniel Phillips on bass, Steve Gutierrez on drums and Vance "Mad Dog" Ternort on percussion. The song Friends and Strangers was written by William Jeffrey who worked as an assistant to Hubert and Ronnie Laws. Ronnie's sisters Debra and Eloise sang backup vocals and Ronnie produced albums for them. Ronnie Laws continued to have success on the jazz and dance charts until he left United Artists in 1982. This comp is a good sampling of his UA recordings. He sang when he recorded for Columbia in the 80s. That didn't turn out too well. Ronnie Laws still tours and plays sessions. His mid-90s tribute CDs to Eddie Harris and The Isley Brothers are worth checking out. But like Roy Ayers and others, Ronnie Laws' legacy is heard every time his music is sampled by hip hop guys. Here's Ronnie Laws performing Friends and Strangers.
Posted by frankp316 at 8:07 AM