AccuRadio Song Of The Day-Johnnie Ray 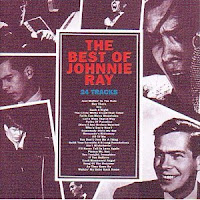 Johnnie Ray was a big star in the pre Rock & Roll early 50s. The 1951 double sided single Cry and The Little White Cloud That Cried were his two biggest hits. Of course when music changed in the mid-50s, Ray faded and never recovered. He never adapted his musical style to fit the times. He was born Jan. 10, 1927 in Dallas, OR. He grew up on a farm and attended high school in Portland. A Boy Scout blanket toss accident left Ray deaf in his right ear at age 13. You'll notice in the video clip he performed wearing hearing aids. Ray moved to Detroit after graduating high school and started singing in local clubs. His music was R & B influenced pop with a histrionic and emotional stage show. A lot of critics thought he was over the top. He was spotted by Detroit DJ Robin Seymour and this led to a contract with Columbia's Okeh label. Ray's first single Whiskey and Gin didn't catch on. But then Cry and the B-side The Little White Cloud That Cried were huge hits and sold over two million 78s in 1951. Mitch Miller produced the record and The Four Lads did the backup vocals. Ray wrote The Little White Cloud That Cried. Johnnie Ray's emotional style on stage struck a chord with teenage girls and he was probably the biggest teen idol of the early 50s. He had a few more hits and did particularly well in England. But by the mid-50s, Elvis Presley and Rock & Roll took over and Ray was left behind. For most of the rest of his career, Ray performed in Vegas. And though he continued to attempt to revive his career, he was mostly unsuccessful. You can get all his hits on this budget comp. Though Ray was briefly married in the 50s, it was well known in the entertainment industry that he was gay and he was arrested twice for trying to solicit men for sex. Newspaper columnist Dorothy Kilgallen was a good friend and was able to minimize the public damage. Johnnie Ray had an alcohol problem and this led to liver disease and his death on Feb. 24, 1990 at age 63. Johnnie Ray is somewhat forgotten today. But he was a big deal in the early 50s. Here's Johnnie Ray performing The Little White Cloud That Cried.
Posted by frankp316 at 7:55 AM