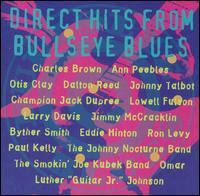 
Eddie Hinton was a renowned Muscle Shoals session guitarist who was just getting his due as a performer when he died in 1995. He was born June 15, 1944 in Jacksonville, FL. After working with bands like The Spooks & The Five Minutes, Hinton became the house guitarist at Muscle Shoals Studios in Alabama from 1967-71. This was at a time when Atlantic Records producer Jerry Wexler turned Muscle Shoals into a soul hit factory. Hinton played on records by Aretha Franklin, Wilson Pickett and with his partner Marlin Greene he wrote Cover Me for Percy Sledge. Hinton's 1978 solo album Very Extremely Dangerous went unnoticed when Capricorn Records went out of business. Another unsuccessful attempt at recording and a divorce left Hinton living on the streets of Decatur, AL in 1982. He encountered old friend John Wyker who helped Hinton and got him recording again. The resulting album Letters From Mississippi got the attention of Bullseye Blues owner Ron Levy and suddenly Hinton was in demand all over the world. Poor Ol' Me is from his 1993 CD Very Blue Highway and this various artists comp is a good intro to Bullseye Blues artists. Hinton was just finishing a new CD when he died of a heart attack on July 28, 1995 at age 51. You may not know Eddie Hinton but you have heard him play guitar on plenty of records. Here's Eddie Hinton performing Letters From Misissippi in Decatur. AL in 1986.
Posted by frankp316 at 7:24 AM