Nakamura to step down as First On Stage president 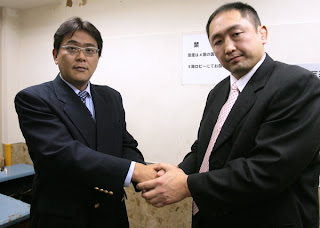 Shinjiro Otani held a press conference on Monday to announce that Yoshiyuki Nakamura will step down as president of First On Stage and Otani himself will take over on Jan. 23. This is something that has been rumoured for the last month since the whole AWA dispute happened. Apparently Otani will concentrate on ZERO-ONE MAX and will not be involved in the management of CHICK FIGHTS SUN. At this point, Nakamura is not leaving FOS and will still be involved in the operation of SUN. But Nakamura has admitted on the SUN blog that the company's future is in some doubt. There are no future SUN shows scheduled at this time. The company has not performed to expectations. When asked by Sportsnavi about the future of CHICK FIGHTS SUN, Nakamura says no decision has been made. It appears that Otani may want to shut the promotion down and concentrate on ZERO-ONE MAX as that is their core business. But Nakamura started SUN so he would like to keep it going. The root of the problem is that the ZERO-ONE MAX fans have not responded well to joshi matches and Otani doesn't want them on the shows anymore. The result is that the future doesn't look good for CHICK FIGHTS SUN.
Posted by frankp316 at 8:11 PM